After attempting a set of figures that made me feel I was accomplishing something complete, and which managed to focused my aims towards a set goal, I next attempted to get some of the more bitty bits off the paint queue.

These Reaper Bones were started in August 2017 when I was trying to get a worm based Dragon Rampant force together.  They were planned to also proxy in as Beasts of Nurgle as I do not like the official GW figure for this unit.  I picture the intended Beast to be an oozy, slobbery puppy that bounces, almost accidentally, over its victims. I find the GW sculpt to be more ‘scary clown slug’ than my own imagined image.

These are not perfect for my needs either but closer than any of the GW sculpts (past and present).  By god there are a lot of teeth and eyes though…  A fast and less than careful mornings painting, with plenty of slime to cover any smaller details I did not want to spend time painting.  Job done (Nurglings for scale).

The afternoons work was also quite fast and dirty.  Unit sizes in Steam Wars are either 5 or 6 men so, a while back, I  decided to have a shuffle about with the units and added a few more Sanwar infantry, of various types, to my existing 5 man units.  I got as far as I usually do (undercoat and base semi-started) then stopped.  Now was the time to put it all to bed, as all they needed was belts, weapons and skin finishing before a heavy sepia tone wash and a bit of base painting. 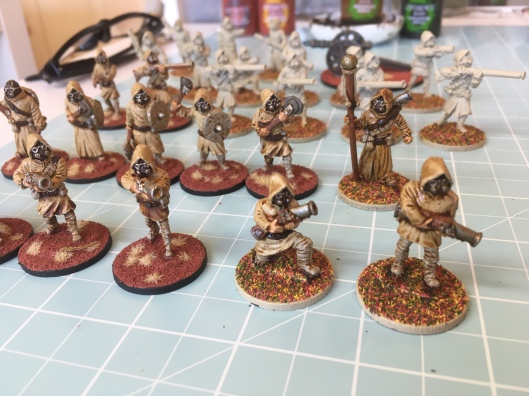 I suspect that painting the bases on these guys took as long, if not longer, than the rest of the work they got. 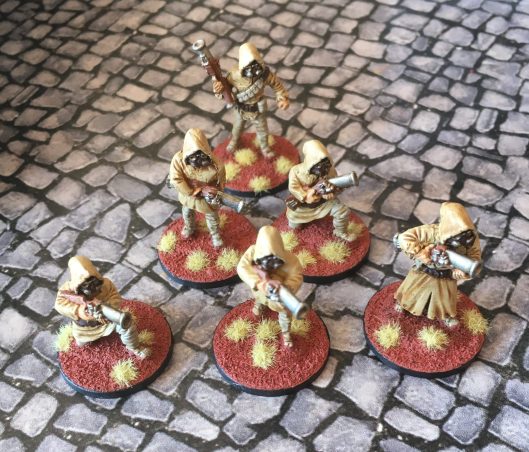 At least its another few figures that can now go back into army boxes, happily finished and ready to use.  Clearing space for other half finished projects to join the painting queue.